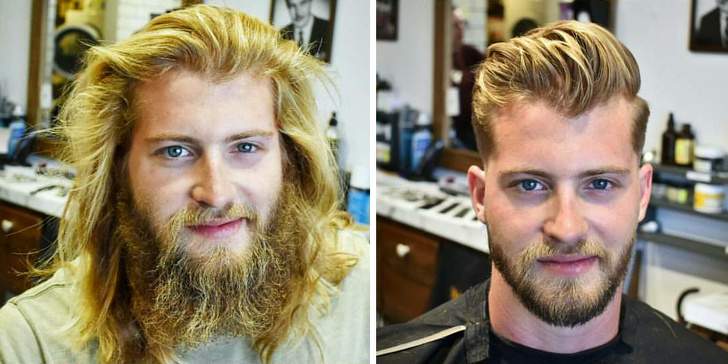 The right hairstyle can mean the difference between looking ruggedly handsome or kind of raggedy. To prove that, we gathered a nice collection of men who underwent incredible transformations after getting a new hairstyle. Most of them are unrecognizable, but it’s their self-esteem that’s taking center stage, and we can’t help but celebrate along with them.

This man was smiling when he had longer hair, but his unkempt hair masked his gorgeous clear eyes. After his haircut, he looked like a whole new man. He may not be smiling anymore, but that’s probably because he can’t believe this is him. And honestly, neither can we!

This handsome fella asked Redditors online if he should keep his hair long or short. To be honest, he’d look great either way, because he can rock both styles. But now he’s a lot more approachable and frankly, he looks a couple of years younger.

He Made A Change

Everyone encouraged this guy to make a change and finally did after almost 4 years. He kept his glasses, of course, but he cut his hair and now he looks a little less like a rocker and a lot more like a business professional. If we’re being honest, we’re digging his new look 100%.

He Got Rid Of It

Most guys with thinning hair tend to avoid getting their hair cut at all cost. But this guy was totally brave and decided to shave his head, but not all the way, and it ended up looking incredible. His new look is still pretty dramatic, and we’re sure he’s made a few heads turn on the streets.

He Tamed His Locks

Before he looked a bit like Kit Harington’s Jon Snow character from “Game of Thrones” with his long, wavy hair. But now that he’s tamed it, he looks even more amazing. Then again, with a jawline and beard like that, he would have looked great even if he’d asked the barber for a mohawk.

He Said Bye-Bye To The Waves

We really liked the wavy bangs in the before picture, but we also love the new haircut quite a lot. It’s a much cleaner look and we can finally see his eyes more now that he doesn’t have all that hair covering the top part of his face.

Don’t get us wrong. We think long hair can look cool, but it can be such a hassle to manage. Imagine having to wash it every other day, detangle it, and style it with gel and leave-in conditioner. Thanks, but no thanks! Fortunately, this guy doesn’t have to worry about that since cutting his hair short, which looks more put together.

In the before picture, this guy looked a bit like Brendon Urie from Panic! Not that there’s anything wrong with that. Brendon was hot when he had long hair, of course! But this dude looks great with his new haircut, which suits his face a lot better than before. Now you can get lost in his gaze and those incredible cheekbones.

The long hair made him look like a rock star, but it was probably making him hot in the summer, and not in a good way. At least now he can rock his short hair and still look pretty amazing. Plus, it’s less of an effort to comb in the morning. Let’s be honest!

Best Hairdo For His Hairline

Long hair isn’t for everyone, especially when you have a receding hairline. This guy got an undercut type haircut, which opened up his face and exposed his handsome look and awesome beard, too. What an amazing makeover!

From Thor To Chris Hemsworth

This guy looked a bit like Thor or a Viking in the before photo. There was seriously nothing wrong with his unkempt Viking look. But after a trip to the barbershop, he turned into a blonde hottie who kind of resembles a younger version of Chris Hemsworth. It’s amazing how a haircut can make all the difference in the world, doesn’t it?