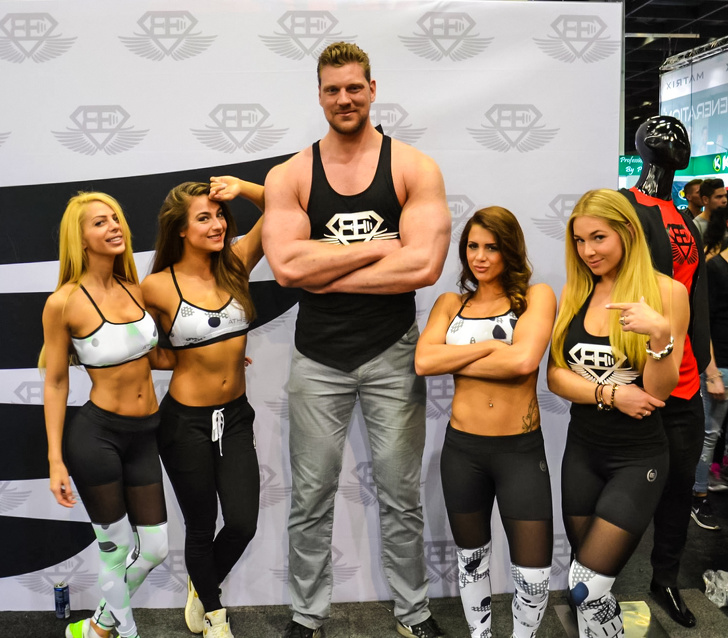 Average heights vary by regions. Take the Netherlands for example. The average height there is about 6 ft. ½ inches (1.838 meters). No wonder they’ve been dubbed the “tallest” country. But the people on this list would make the average Dutch feel very tiny.

Robert Wadlow’s impressive height was caused by hyperplasia which produced high levels of human growth hormone. He not only grew to be 8 ft, 11.1 inches (about 272 centimeters), but he also weighed a shocking 439 lbs (199 kilos).

As far as the Dutch go, Olivier Richters is above average. He’s 7 ft, 2 inches (218 centimeters) and weighs about 419 pounds (190 kilos). Not only is he seriously tall, but he’s also a ruggedly handsome bodybuilder and one of the tallest actors around.

Caroline Welz worked as a model using the pseudo name Caro, but she’s even more famous for being the tallest woman in Germany. She’s 6 ft, 9 inches (2.10 meters) and weighs 258 pounds (117 kilos) which in this case, is okay for a model.

Broc Brown is 8 ft, 2 inches (206 centimeters) and has been considered one of the tallest teens around. But his ginormous height is the result of a genetic disorder known as Sotos Syndrome, which is extremely rare. But judging from his smile, this giant has a big heart.

Leonid Stadnyk experienced a massive growth spurt after he had brain surgery when he was 13. There was a gland tumor present, which produced a massive secretion of growth hormones. He never wanted to be measured, but his height was recorded in the Ukrainian Book of Records as 8 ft, 5 inches (257 centimeters!)

Sultan Kösen is considered one of the tallest men in and with good reason. But his impressive height has caused him to have a tough time finding clothes that will suit him. Which is really not that surprising. At 8 ft, 2.82 inches (251 centimeters) tall, this guy has some pretty long arms and legs.

Brahim Takioullah’s podiatrist had to create special shoes that would support his weight, and it’s not surprising. The 8 ft, 1-inch (246 centimeters) Moroccan man’s left foot is .381 meters and his right foot is .375 meters big. He also broke the Guinness Book of World Records for the largest feet.

Amazon Eve, aka Erika Ervin, is an American model, an actress, and a fitness trainer. She became the epitome of health after realizing that a cushy office job wasn’t the right fit for this gal who’s 6 ft, 7 inches (201 centimeters)

Russian beauty Ekaterina Gamova has retired from the world of volleyball, but she’ll always be known as the “Queen of Volleyball.” We’re not really surprised that she was a top athlete because she was one of the tallest female athlete in the world at 6 ft 9 inches (206 centimeters).