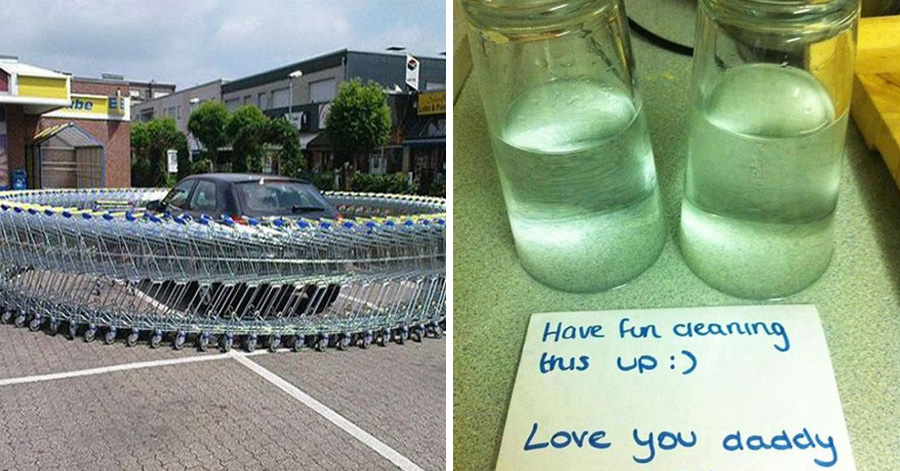 April Fools’ Day is here! So you know what they say: don’t believe anything you read online! You might get a fake email asking you to dress up for a last-minute costume party at the office, only for you to become the laughing stock at work. Maybe someone will trick you into eating onions that looked like caramelized onions. If anyone offers a slice of cake, make sure to check twice. It could very well be a bar of soap that was hand painted to look like a tasty treat.

So don’t wait to fall for someone else’s prank! Instead, beat them to the punch and pull some of the most hilarious pranks ever on your friends and family today! Here are some suggestions that are bound to crack you up and make your target pull their hair out in frustration.

Inflate a bunch of balloons and tape them to the other side of the door. Everyone will be too afraid to open the door because they think the room is full of balloons, and they don’t want to get carried away by a balloon avalanche.

Infest Their Office Space With Rats

This might be a little too expensive for some of us, but if you can afford it, buy a bunch of plush or plastic rats and fill your co-worker’s office space with them. They’ll be so scared they might quit before you have a chance to scream “April Fools!”

Leave A Victim Somewhere Around The Office Or House

Leave a fake body lying on the floor of the bathroom. This won’t fool anyone for long, but it might scare them just enough that they’ll run out screaming, “Quick! Call 911!” They’ll feel awfully silly when they realized they’ve been duped. And if you can stay nearby, make sure to get the whole thing on camera!

Unscrew the shower head and add a few chicken bouillon cubes. The next person who showers won’t be able to get the stench of chicken out of their hair and skin. It’s the coolest prank to pull on a roommate or a sibling. But don’t forget that they might retaliate anytime soon and make you pay!

Fill a cup halfway with water. Place paper over the top, flip the cup, place it down, and pull the paper out. It’s that easy to pull this off. Now serve someone a cup of water and watch them react when they lift the cup and water comes pouring out.

Grab a bar of soap and coat it with some nail polish. The polish will make it impossible to lather the soap. But watching the person trying feverishly to use it to wash their hands will have you rolling on the floor. This prank’s so good, you might just have to film it and share it online!

Call someone to pull your old carpets out. When they do this, they’ll feel like they’ve walked into a haunted house when they see the words “Get Out” all in red along with streaks that look like blood on the floor.

Want an epic prank idea that’s totally cruel? Shock everyone’s palate by giving a bunch of onions a caramel makeover. Then offer it to your friends as candy apple and watch as their eyes tear up and their faces scrunch up in disgust.

Block someone’s optical mouse sensor with some paper and tape. The paper should have some sort of note or meme that looks like a troll or a goblin. Once the person realizes their mouse isn’t working, they’ll flip it over and discover something they’re being pranked big time.

You Shall Not Pass

Create an aquatic minefield by filling a bunch of cups with water and then place them all over the hallway of a school, an office building, or even your own home. Then watch as people are forced to figure out how to get across without stepping on the cups.