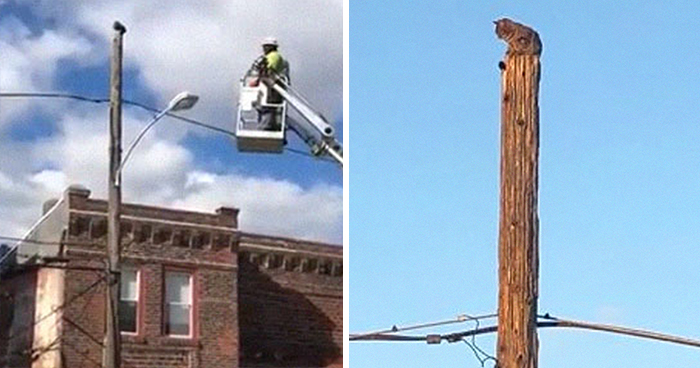 When Maurice German from Port Richmond, Pennsylvania received a distress call from neighbors, he jumped into action. It turns out that they had spotted a cat stuck on a telephone pole and they needed his help. So, in lieu of a cape, German grabbed his hardhat and yellow vest and prepared to rescue the kitty. But he had no idea his bosses at Verizon would reward his kindness by suspending him. After news broke that the man had been suspended over rescuing a kitty in distress, Verizon got flooded with angry commenters who defended German’s actions.

Amanda Fairchild Boyce of Port Richmond, Pennsylvania was the first one in the neighborhood to notice that her neighbor’s cat was trapped on top of a telephone pole. It was in serious danger, but she had no idea what to do. The kitty had apparently gotten stuck on a Friday night around 10:30 p.m. So, she and her neighbors decided to try and help the neighborhood cat out, but they couldn’t rescue the kitty themselves. In fact, they could easily make things worse by scaring the kitty by attempting to grab it!

Verizon To The Rescue

Eventually, the neighbors realized that they needed help, so Sandy McLeish, who’s one of Boyce’s neighbors and an animal activist, went looking for a savior. Fortunately for the kitty, who was clearly petrified, she found one in the form of Verizon worker Maurice German. The man was more than happy to help the stranded kitty and the neighborhood out. But he’d end up paying a hefty price for it.

German used his Verizon equipment to get a lift towards the telephone pole so he could reach out and grab the kitty before disaster struck. But he didn’t know he was being recorded or that the footage would go on social media. Eventually, the video was acquired by news media stations like CBS, and viewers were relieved that Momma the cat had been rescued by this fearless hero… well, almost everyone. As it turns out, German’s bosses’ weren’t having any of it.

While the community hailed German a hero, Verizon wasn’t amused by his act of bravado. Once they saw the video, which was filmed by Boyce, they decided to suspend him. Verizon spokesperson Rich Young claimed they had no choice but to discipline German because he had put the people around him in danger. He added that the company didn’t enjoy taking this course of action but that the safety of their employees and customers was far more important.

Since it was her footage that ultimately got German suspended, Boyce slapped the company back with an online post that explained what Verizon had done to a man who was just trying to do the right thing. She also asked people to spread the word, and it worked. Online netizens quickly started sharing Boyce’s post and commenting about how awful the communications provider had reacted to his good deed. The outrage spread like wildfire.

He Has A GoFundMe Page

Bystanders who witnessed the rescue and online netizens all agreed that German didn’t deserve to be punished. They also knew that this suspension would hurt his pockets, so they created a GoFundMe page. They’re no longer accepting donations as they’ve reached $3,395 of the $2,400 goal. But people have continued to express their love for German and their distaste for his former employees.

Can You Hear Me Now?

If Verizon uses their famous tagline “Can you hear me now?” on customers, people will likely shout “no!”. Everyone seems to be on the same page that German was just saving that poor kitty’s life and there’s nothing wrong with that. It’s just not the way you treat an employee who’s a hero. It’s obvious that Verizon has gotten a ton of publicity for their action, but we doubt that you could call this good publicity. If anything, this is really bad PR, and we’re fairly certain that there are a couple of Pennsylvania residents who are switching to AT&T right now.