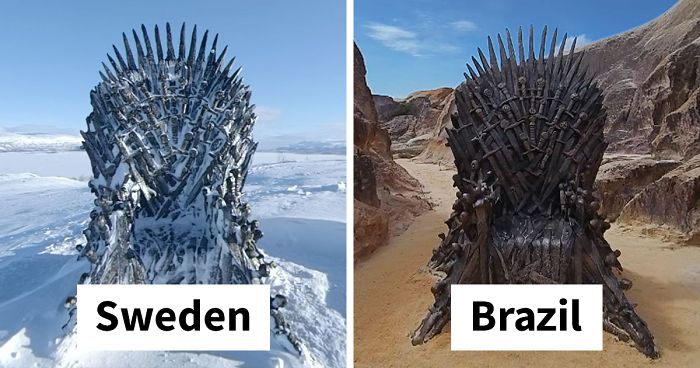 As “Game Of Thrones” prepares to air its final season, the show has decided to give it a bit more publicity by sending fans on an epic scavenger hunt. Now most of us would agree that the last thing this amazing show needs is more publicity, but the powers that be obviously felt otherwise. And now, you can help find the remaining thrones hidden around the world. Four were already found, so after you read this, you may want to start looking for the last two. Is this the most epic “where’s Waldo” scavenger hunt you’ve ever seen, or what?

This may be the most epic quest ever! HBO is creating quite a buzz for the final season of “Game of Thrones” by sending people and travelers on a scavenger hunt to find 6 thrones for their epic global scavenger hunt. But you won’t find all these thrones in one place. They’ve been placed in 6 different areas around the world, and HBO’s keeping the location of two of them a guarded secret. After their Tweet went viral, people started going nuts trying to figure out where they could’ve been hidden!

The Throne Of The Forest, UK

Four thrones have been found so far. The first one was in the UK and it’s called the Throne of the Forest. Now, we all love scavenger hunts. We enjoyed Easter egg hunts when we were little, and as grownups, we got a thrill of playing McDonald’s version of Monopoly to win free stuff. But G.O.T. fans have an even bigger challenge. Those who have been fortunate to find a throne, have taken photos and shared them on social media.

When HBO decided to scatter 6 iron thrones in various locations throughout the globe, they weren’t just whistling Dixie, honey! The Throne of Valyria was found all the way in Brazil. Just look at that beautiful work of art! To help scavengers, they provided 360-degree videos of the thrones’ locations. But they didn’t exactly make it very easy for everyone. Can you imagine what it would be like to simply stumble upon one by accident? We should all be so lucky.

The videos provided very few landmarks, which made it pretty difficult to pinpoint an exact location, like the Throne of Joy. It looks like it’s in the middle of the desert with a rockface in the distance. So, you really have to look for those clues to figure out the precise location. But some of the remaining thrones could literally be anywhere! So, you either have to be very familiar with the throne’s surrounding or be willing to get in your car, plane, or boat and trek across the world until you find a throne.

Throne Of The North, Sweden

Where else would you expect the Throne of the North to be but in a chilly climate. Unfortunately, there are a ton of places around the world where the temperature drops below freezing. We’re surprised most people didn’t just find one of these thrones by chance. But there are still two thrones that have yet to be discovered.

The Throne of Ice is the fifth throne, but its location remains a secret. We do know that the throne is located somewhere chilly much like the Throne of the North was. But other than the pine trees in the background and a ton of ice, there’s no way of knowing where it might be. Maybe Alaska? Canada? Who knows?

There’s Also An Unknown Throne Too

And if that wasn’t enough of a brain , we also have to deal with the mysterious sixth throne, which will not be revealed until the Throne of Ice is found. So, in the meantime, keep your eyes peeled Throne Rangers! You never know! You might stumble upon the two remaining thrones and make G.O.T. history!