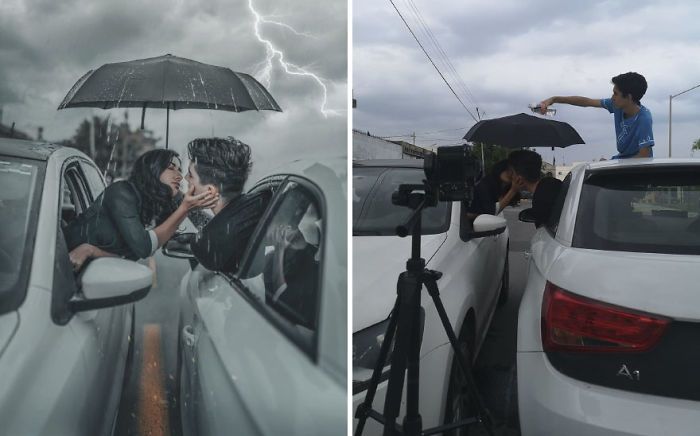 There are tons of spectacular cinematic photos popping up on Instagram every day and Mexican photographer Omahi is among those uploading these jaw-dropping snaps. But you don’t have to be a magician to get the perfect photo. You just need some suggestions from a pro like Omahi who will show you how to turn the simplest photo into an eye-catching work of art with the help of Photoshop and a little trickery.

Omahi has proven that you can turn something as mundane as a couple in separate cars kissing each other into a movie-worthy masterpiece. All you have to do is add an umbrella and then add a lightning strike in the cloudy sky. Then, you just lighten the image to get that the look that makes the movie poster from “The Notebook” seem lame. If you don’t know how to use Photoshop, you can download the apps Snow, Snapseed, Photofox, or UltiMatte and have fun applying filters that add a bit more drama to the shot.

From Dull to Awesome

Omahi was able to turn the garden outside of a “Corner Deli” into the perfect venue to create a flawless photo. He clearly has the ability to see things most of us would never even notice. How else would he have known that lying this woman next to some poinsettia flowers could create such a striking image? It looks like the cover of a Lady Gaga album!

Winter in the Middle of Summer

It doesn’t matter to Omahi what season he’s in. If he wants a winter shot, you can bet that he’ll find a way to get it. In this instance, he used a spray can to simulate icicles, which he placed in front of the model. It’s a creative approach which turned the background at a local park into a winter wonderland.

Wrapping a Page of Love

Wrapping a piece of paper around the lens is sheer genius! It allowed us to focus solely on this couple who are enjoying a super romantic and private moment. The shot is definitely striking. We’re not even sure how he was able to craft such an incredible shot. The photographer even got the couple to hold a flame for a more dramatic effect.

When Public Bathrooms Sub as a Studio

Omahi doesn’t always have the luxury of setting up a photoshoot in a park, a forest or a beach. So sometimes he gets creative in unusual places, like a public bathroom. Check out this perfect shot of a gal whose mouth is covered by a hand that was painted black. To add a bit more drama to the shot, Omahi had the guy also hold a rose. Just look at the expression in her eyes and the dripping red drops from the rose. It’s so captivating!

Friends Are Worth Everything

There’s no doubt that Omahi has a lot of creativity. How else do you explain how he is able to create a shot of a woman holding a sunflower that’s on fire? The mesmerizing effect was created thanks to Photoshop, of course. Needless to say, it would’ve been too risky to set the flower petals on fire. But he’ll be the first one to admit that he couldn’t create these awe-inspiring photos without the help of his friends, who in some cases are more valuable than his expensive equipment.

You Can Transport Anywhere

Omahi doesn’t need to travel the world to get the right background. All he needs is a screen in the background, and he can take his model and us, to a remote desert location in a land far, far away. He even gave his model some sand for her to pour out of her hand to make the illusion more realistic.

Was It Worth It?

Omahi explains: “I trusted more than 100 thousand pesos to a cheap plastic case to be able to make this picture… was it worth it or was it stupid?” We’d say it’s totally worth it to create this photo that is eerily reminiscent to the moment when Rose let go of Jack in “Titanic.” Is he an artist or what?